Why does no one ever mention Kefka!!! He was COOL! He was just a crazy evil clown dude!!
out of interest what time is it where you are coz its 1am here and i’m wondering if i’m sad for being up on the pc at this time

You obviously have to be new if you say no one mentions Kefka…and just out of interest what are you specifically referring to anyways?

And a lot of people stay on a computer past 1 am. It is the holidays you know.

EDIT: Since it is 1 AM and it is 9 PM for me, you must live in the UK or the west coast of Europe. That would make you at least 4 hours ahead of most users on here, since I am on the east coast of Canada.

Well i’ve been at work all day (woo triple pay!!!) and i’m up again tomorrw for work. any hoo i haven’t read anything about kefka anywhere coz most people are always talking about ff7 which in my opinion was a tedious waste of time (but was still better than 9!)

FF7 is a likely topic lately because of Advent Children. And no, it hasn’t been around more often than usual, especially here, as FF X-2 just got released and there are better things to talk about…

Originally posted by angelic_deathscythe
…ff7 which in my opinion was a tedious waste of time (but was still better than 9!)

Originally posted by me (in the Main Forum)

I was just playing through FF4 again, and I had forgotten how boring the game was. It really doesn’t begin to have a plot until you fly to the moon and reach the home of the Lunarians, and by then, the game is already starting to wind down. Rydia is still awesome, though, even if she is very slow during encounters.

Ok, so this “tedious waste of time” thing is not an unknown phenomenon in the FF series. So what to do, gossip about the bad guys? Well, I heard that Kefka wanted to call himself Gaeph Rute, and went crazy when he wasn’t able to, thus giving us FF6. No, not really.

But anyways, the FF series requires an art of being able to pick out the good bits. And speaking of picking out bits, I did happen to mention Kefka earlier today in the Cids thread.

Pff… Kefka is very popular, in fact. For some odd reason, lots of people love his crazy laugh, his insanity, and his backstabbing tactics. I don’t but eh… (shrugs)

I must agree that Sephiroth is majorly overrated. Actually, for all the time he was a villain…

He was either being controlled by Jenova, or was in fact a Sephiroth clone taken over by Jenova.

Sephiroth as a character actually didn’t do much in terms of villainry.

Sephiroth as a character actually didn’t do much in terms of villainry.

WAIT a second. You’re new and you DON’T like Sephiroth? That’s never happened before…

And yeah, Kefka is probably one of the most loved Final Fantasy characters. He was just really wonderfully weird. He also has some of the most memorable lines in any FF game. 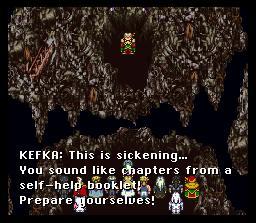 On GameFAQs, on one of the FF polls “Who is the best villian”, Sephiroth beat EVERYONE (Even Kefka) by a land slide.

kefka’s crazy enough to be in my sig… with a quote!
he’s such a lovable psycho magic clown bent on universal destruction!:mwahaha:
and he’s got a whole tower for himself!!! and a colection with many familiar faces, a collection of self-help booklets and a flashy-kill-espers-blue-thingy!!
he really is one of the best villains… but I think Seymour was better… or at least equal… I dunno why, he was so… Ironicly twisted!! he came back just to kill you… again and again and again and again until you finally killed him (not really, just a non-spoileriffic way of saying it)

sephiroth wasn’t good enough, play the game, understand sephiroth and you’ll see he’s not that great… unlike the weapons… those were cool

Originally posted by PanamaJack
WAIT a second. You’re new and you DON’T like Sephiroth? That’s never happened before…

I may be new here, but I’m a fairly known member at a couple other boards. I’ve studied the game’s events, some summaries of what really happened, and arrived at the conclusion that Sephiroth is innocent, merely the puppet of a bigger evil.

Sephiroth admittedly looks cool, but that’s all he’s got going for him. (That and the fact that FF7 is popular)

The real Sephiroth didn’t do anything wrong. Every crime “he” comitted was actually Jenova’s planning, either controlling Sephiroth directly or manipulating a clone to use his appearance.

Still, he’s so massively popular that Advent Children seems to be based entirely off of him (or guys that look like him). The chances of my favorite, Cait Sith, everyone’s…

…appearing in Advent Children is most likely nil, due in part to the sticky situation of Cait Sith’s character. Maybe that’s for the best, though, seeing what the new character models look like. :thud:

Even though Kefka isn’t my cup of tea, he does have some excellent lines. The sand on the boots, the self-help booklet, the thousand voices screaming in union… O_o

Sephiroth never said anything so quotable (the real one anyways).

Originally posted by Ket Shi
Pff… Kefka is very popular, in fact. For some odd reason, lots of people love his crazy laugh, his insanity, and his backstabbing tactics. I don’t but eh… (shrugs)

Yeah. I just find him reminiscient of The Joker (one of my all time favorite villains) particulary Nicholson’s movie portrayal thereof.

You know how you’ll have a thing for someone early on in your life, a real potent crush or whatever, or you go out with them for a while or something, and you really like them, but things don’t become all you thought they could. Then, afterward, every time you see someone who looks more than a little like the first person, you’ll be atracted to them too, and attribute the first person’s traits to the second person, at least until you get to know them better and find out how they’re different.

Originally posted by Gizamaluke
[b]On GameFAQs, on one of the FF polls “Who is the best villian”, Sephiroth beat EVERYONE (Even Kefka) by a land slide.

GIRLS? Most of those fans are BOYS

Sephiroth is uber popular with the teenage boys you know.

Originally posted by Evangelion
GIRLS? Most of those fans are BOYS

Sephiroth is uber popular with the teenage boys you know.

And he’s also REALLY popular with the fanGIRLS who always put him in Yaoi with Vincent.

Ok, honestly, the reason that I don’t like Kefka as a villian is because it is hard to imagine a hero matching wits with him. One would need to go through some extreme and unnatural mental contortions to even recognize any wits that Kefka might have.

I would definatly say i prefer Kefka to Sephiroth. Every1 likes Sephiroth, Girls, Boys people that arn’t really girls or boys…(um don’t no where that was going.) Sephiroths just one of those people that really stands out because for me and most people here (england) ff7 was the first ff we played and that sticks with you and most people played 7 -10 but didn’t bother with the ones before because they didn’t have a NES/SNES and by the time they came out on ps1 nobody cared. So most people in England don’t no who Kefka is which i think is a shame because he is probably one of the best.

I agree with you that a lot of people in England might not know an awful lot about Kefka and it’s definately a shame. The earlier Final Fantasies have only recently been rereleased, and even then, they weren’t hyped up at all. I remember talking to several Final Fantasy fans over here that didn’t know that Anthology and Origins had been released or even existed. And we don’t have FFX-2 yet! Living here sucks.

Damn right… and the weather sux

Originally posted by gab157
kefka’s crazy enough to be in my sig… with a quote!

You know, I find many instances in real life to use that quote, and I do. :hahaha;

Kefka > Sephiroth for me, I like both. But if I was a movie director and wanted to make an over-the-top action film (Killer, Hard Boiled) I’d cast Seph, while I would use Kefka in a Se7en like matter.