Which was the coolest/strongest/most useless/strangest ultimate Weapon you have EVER seen in an RPG?

(if possible with pic)

Lionheart, because paired with aura and meltdown you were 100% unstoppable.

Houchou from Slashem, it’s a chaotic spoon artifact. You throw it an enemy, the enemy dies, and the spoon is gone. Only one exists so make sure you hit.

Holy Defender (D&D 3.5)
Normally its a +2 Steel Sword, in the hands of a Paladin it becomes a +4 Steel Sword with area burst “Greater Dispell Magic” that can be used as a free action once per round.

I dont remember the specifics, but things like that are cooler than “OMG WTF LOL BBQ WEAPON O’ MASS DESTRUKTION” that every hero gets at the end of a Final Fantasy game…

Part of a weapon being awesome, IMO is practicality and uses beyond SMASHY SLICEY.

As for most useless ultimate weapon… Hmmm… Meteor… It didnt kill me.

you know that one sword in chrono cross, masamune? i guess it wasn’t really a sword but anyway it pwned.

the hp shout was cooler than any of those weapons. :moogle:

dekars sword (takes half of enemies hp with one (wrath)attack)

Most useless UW= Aeris’, since there wasn’t a point to her even having one.

Poison needle from Dragon Warrior series. Chance of instant death against anything.

Which was the coolest/strongest/most useless/strangest ultimate Weapon you have EVER seen in an RPG?

(if possible with pic)

You know, SOTN may not be an RPG, and the Alucart sword certaintly wasn’t the best, but hey.

the hp shout was cooler than any of those weapons. :moogle:

The HP Shout is, though. The Nothing Materia growth weapons are the ultimates, right? Sure, they may not seem good, but each one has a special property to it that makes it useful.

I’m going to go with one of these three:

it even says so in the game guide. :moogle:

Lunar 2’s “legenary lid” It was a pot lid that gave you stat bonuses to every ability, even though after a while it outlived its usefullness

A high level monk’s fists in Baldur’s Gate 2, since they like, exploded people 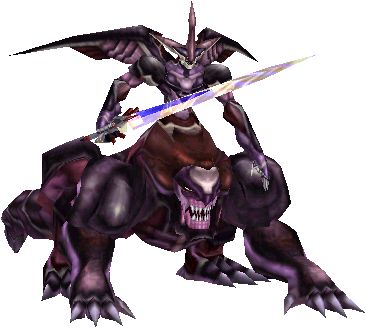 Anything fan-made from Neverwinter Nights. The amount of god-modding in that game is insane. Probably Lionheart from FVIII for one actually made by the design team.

I liked the Ultima Weapon in FFVII becaue it lost power as you lost HP. Good idea that.