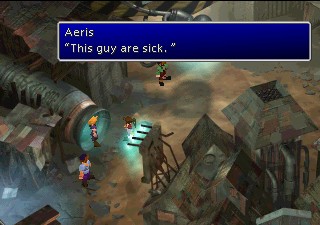 There is something i;ve never understood. In Wu Tai after you beat Godo, when you are walking back down, if you talk to the 2nd guy you had to fight, he talks about a materia and a ferice beast in the underground pipe. Anyone know what he was talking about ?

My male Choco made it with his half-sister and made a Black Choko. That’s all the incest mine had to commit this time. I couldn’t produce a Green Male with the Blue Female’s father, so i had to capture another choco. Racing is a good way to rack up GP, plus, that guy who is “hiding” before the exit has appered every time i went to leave, so i have like… 800 GP

I have never been quite sure about that, but I think the person is talking about the Ghost Ship, in the underwater tunnel, to the reactor in Junon. For you need to beat it (morph it actually) to get the item to trade for Underwater Materia. So I’m guessing that is what the person meant.

Ah one of the game’s less than subtle hints:fungah:

The weapons were pretty easy to beat…

Compare them to other monsters, in comparison Seph’s a pussy.

It truly depends on how prepared you are. Because if you put in the time and effort, they can be really easy to beat.

Originally posted by Shinobi
They really are thinking of making a sequel to it, for PSP.

Actually, Square-Enix dumped the idea of making a direct sequel to Final Fantasy VII. As the original game engine was much too old (7 Years), they would have to make the sequel from scratch. Nomura figured that this would take too much effort, and stated that a Final Fantasy VII sequel would be “unlikely”.

You can read the article HERE

Quick question Frameskip, what does that have to do with anything that has been menyioned lately?

Guys, the link that PanamaJack posted was from RPGamer, that’s why FrameSkip made the comment.

Aww shit. I was looking forward to that ;_;

Now I get, I looked at the link, but never looked to where it went. So I didn’t get the reference, but now I do.

Anyway, back to business.

Ohh yeah… right… okay… yeah… anyways… i beat FF7 and moved on to FF5… but alas, spare time is running short and i dotn get to put as much time into it. The job system kicks my ass every time.