From other impressions I’ve heard it seems that you can actually encounter random double battles, and without the need to bring along a one time partner either. Which is good because they always have so many pokemon devoted to doubles support but outside of competitive battling (which is usually played on a level far beyond what most support options could afford you anyways) there’s virtually no double battles to speak of outside of a random trainer.

So OK, the first question is, which to get, Black or White? What are the differences? Yeah I suspect they’ll be minimal, but there’s always that odd pokemon you really want but can only get on one of the versions (besides the legendary ones of course.) I’m sure they’ll eventually come up with a Pokemon Grey, but why wait?

As for current likes/dislikes (this is based strictly on appearances for now) I’d say the lamest (even more than the Ice Cream cone pokemon) is the garbage bag one: http://pokemon.wikia.com/wiki/Trubbish (Wow, they REALLY must have been running out of ideas when they got to that one!) On the other hand, I really like the three-headed dragon (http://pokemon.wikia.com/wiki/Hydreigon) because of the way it evolves: it starts with one head, its second evolution has two, and the third has three BUT two of them are used as hands. Neat idea.

I’m kind of on the fence with the chandelier one (http://pokemon.wikia.com/wiki/Chandelure) I tend to find pokemon based on objects rather than animals or plants absurd, but damn if it isn’t pretty!

As for current likes/dislikes (this is based strictly on appearances for now) I’d say the lamest (even more than the Ice Cream cone pokemon) is the garbage bag one: http://pokemon.wikia.com/wiki/Trubbish (Wow, they REALLY must have been running out of ideas when they got to that one!) On the other hand, I really like the three-headed dragon (http://pokemon.wikia.com/wiki/Hydreigon) because of the way it evolves: it starts with one head, its second evolution has two, and the third has three BUT two of them are used as hands. Neat idea.!

Trubbish is no different than muk/grimer or koffing/weezing from the original games. No real surprise there.

In terms of differences, white has white forest, black has black… something. White forest the pokemon are lower level and you can catch them. The corresponding place in black has higher level pokemon but I heard you can’t catch them. Other than that there’s different legendaries and regulars.

Black City has a bunch of high level (65-ish) trainers, but nothing to catch really. White Forest sounds much better but I don’t really know much about it.

Also, the experience rate changes depending on the level difference, period. There’s no point where it starts dropping off, it drops off every level no matter what.

Speaking of experience, I love Audinos. Relatively easy to encounter and loaded with insane exp? Delicious. Heck a level 1 Pokemon can earn almost 300,000 exp from the highest level wild ones (I think anyway, don’t know of any higher).

Could you guys please use spoilers… ^^ I haven’t played it yet and probably won’t for some time. Thanks!

Sorry, we didn’t mean to spoil things for those who haven’t played the game yet. I’ve certainly been trying to avoid that which why I spoiler-tagged a comment about the game’s story above.

The rest of the comments seem to be more useful than spoilerish, such as which game you should buy eg. if you play the game more for the challenge you should play Black, and if you prefer to just catch Pokemon you should play White, based on the above comments. (I prefer to catch 'em all.

Gila: Toxic Waste monsters = cool, garbage bag monsters = not cool. In my book anyway. (Just wait until I play the game and find out that Trubbish is really useful, ha ha.

Look Garbage Bag is evolving! It evolved into a Trash Can!

SUPER SEKRIT!!! Should you trigger it’s evolution on Sesame Street instead it’ll evolve into Oscar the Grouch.

Don’t have the time sadly.

(And I disagree, I think B/W has some of the best pokemon designs ever.)

So OK, the first question is, which to get, Black or White? What are the differences? Yeah I suspect they’ll be minimal, but there’s always that odd pokemon you really want but can only get on one of the versions (besides the legendary ones of course.) I’m sure they’ll eventually come up with a Pokemon Grey, but why wait?

Personally, just use this: 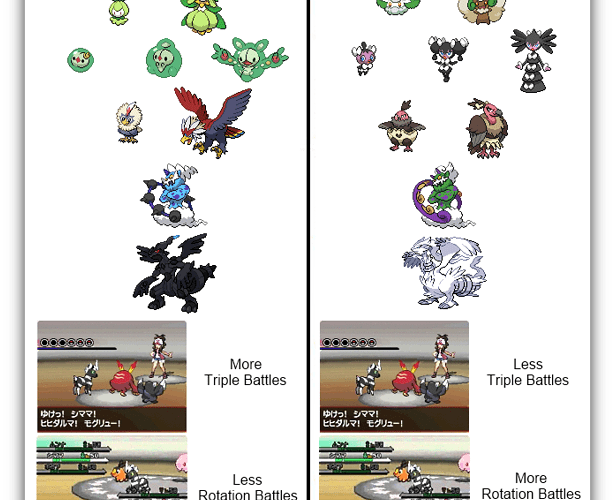 U3ZUB.png615×1330 505 KB
The only other thing it probably doesn’t mention is that the 8th gym town also looks different. In Black, it looks futuristic, where in White, it looks ancient. Personally, White has better exclusives.

Personally, just use this:

The only other thing it probably doesn’t mention is that the 8th gym town also looks different. In Black, it looks futuristic, where in White, it looks ancient. Personally, White has better exclusives.

Those are the only exclusives? That doesn’t seem to make sense seeing as how there are over 500 of these damn things to catch now.

(Also, why does White have the Black Legendary, and White the Black One? It’s kinda confusing.)

But overall, yeah, I think I’ll go for White.

Update: I could not wait anymore so, I AM playing Pokemon White now! …On an emulator on my computer. Yeah, I know, I feel bad already, but I’ll make up for it by buying the game (and a DS) when I have the money. It’s just that it looked SO much fun from what I could see in the Let’s Plays on YouTube! And It IS!

Note that the damn thing runs at about 2/3rds its normal speed on my computer, probably because all I have is like 256 of RAM. (And yes, that’s including all the game fixes and patches I could find online.) But again, I’m enjoying it so much I don’t really care. Plus, I watch the game at normal speed on Youtube, so it sort of balances out for me.

On the game itself: so far it’s pretty much like the traditional Pokemon games (I’m up to Road #3) except for two things: first, your character has TWO best friends/rivals, a boy and a girl, that show up all the time to challenge you, explain things or ask for help. (I can’t help but wonder if they’re meant as romantic interests? These are teenagers after all. Though since the protagonist can be of either gender, they can’t be overt about it.)

The other thing that stands out is that the bad guys claim to be committing crimes in order to FREE Pokemon from human exploitation, which has long been a criticism of the series. Though I doubt that’s what they’re really after, it’s a nice new spin on things.

The only frustrating thing so far was catching the mole Pokemon, I had to run into the dust clouds like 8 times before I found one, grrr.

Drillbur’s evolved form is a hardcore motherfucker. I named it “Rape Mole” and it never leaves my party. Except to rape.

I hate that the Game Sync and Dream World are going to be unavailable and further delayed due to the Tsunami; I feel like I’m missing out on a whole lot of pre-Elite Four game play and I’m nearly finished.

What, exactly, is the whole Dream World thing about? Is it some kind of online player combat feature? The only thing I know so far is that some Pokemon abilities change in it eg. attacks that have a chance to miss never do, and such.

Update: just finished Pinwheel Forest. Managed to catch all three of the Elemental Monkeys! It took a LOT of tries, believe me.

I’ll insert them into my team ASAP.Going into [STRIKE]The Brooklin Bridge[/STRIKE] Skyarrow Bridge next, wonder what it looks like…

Basically, you use “Game Sync” to put your pokemon to sleep, and what that does is transfer your data to the Pokemon Dream World website. Then you go on the interwebs to the Dream World website and do stuff there for about an hour. Stuff like growing berries, discovering dream-world pokemon (the ones with the different abilities and whatnot that’s been mentioned) trade with neighbors (people on your Pal Pad, I think) and some other stuff. Then after your daily hourly time limit is up, or you choose to quit, your data is transferred back to your DS and Violia, you can catch your found Pokemon in the Entralink forest and get your berries and whatnot.

Yesterday was the date it was supposed to have been released to the U.S. Japan still has theirs functional.

Update: Finished [STRIKE]Manhattan[/STRIKE] Castelia City. Wow, were there things to find and do there! The bridge sequence was really nice! Too bad it means you have to walk a LOT to get back to Route 3. Speaking of that, there was an area of “tall grass” there that I could not explore because, as usual, someone was standing by the gate and wouldn’t move. Geez I hate when they do that! Couldn’t they use a better excuse? Anybody knows when he’s supposed to move?

I’m really enjoying the game; the story, not as much as I expected- the bad guy’s “we should not exploit Pokemon” speech had no real convincing points. And some of the mistakes they do- like babbling their plans out loud so the heroes can notice them- are just TOO dumb, even for a kids’ game I say.

The gameplay however is as good as ever, and I’m actually enjoying the developing relationship between the hero and his two best friends/rivals. I actually feel bad to have to beat them (well, Bianca, anyway. She’s nicer.)

Next up: Route Four which is… a desert? I didn’t know they had desert in New York! Hah!

Is it poKAYmon or poKEYmon? That is the million dollar question.

As per the opening of the early seasons.

Update: Got the bicycle, so I went back all the way to the Tall Grass area on Route 3 and yes, the guy blocking it was gone. (I think it’s the same guy who gave me the bicycle!) Caught three new Pokemon there and added them to my team.

(Oh yeah, for those who don’t know, that’s how I always play Pokemon: as soon as I catch a new Pokemon I insert it into my team, removing the oldest one. Yeah I know that’s not the best strategy, but I don’t care, I just want to actually USE every Poke I get at least once. Besides it’s more challenging this way. I only deviate from this when strictly necessary eg. if I need a Pokemon that can learn an ability needed to get to special area (Surf, Rock Smash etc.) or if I need help to beat a particular gym.)

Finished the first level of the Desert Resort (a resort… in a desert?) and will explore the underground section next.

(Btw, I find the comments made by the random trainers I encounter much less stupid than Team Plasma’s- not to mention funnier! Ex.: One Psychic Trainer (Before the battle:) “My Powers allow me to see the future!” (After I beat her:) “I knew I would lose!” HAR!