Normally, I avoid politics, but since this actually invovles my State...

The governor of new York has resigned after being caught on federal wire tapping to be planning to spend some time with a $5,500 prostitute. That’s five thousand, five hundred dollars an hour. And apparently, this was not the first time.

Personally, I give major kudos to whoever took that picture of him and his wife.

Yeah I saw that picture too and I thought “wow, worst picture ever”. And holy shit, what the hell does the woman do to earn 5500 an hour?!

I think for $5,500, she had better allow you to fuck her however the fuck you want, continuously, for several days. And you can bring your friends along. And she’l bring ehr hot, 18-year-old sister. if she can get people to pay that for just an hour, then she has the greatest scam in the entire world going there.

Yeah I saw that picture too and I thought “wow, worst picture ever”. And holy shit, what the hell does the woman do to earn 5500 an hour?!

Given the price, I’d say the question would be what does she not do.

Spitzer resigned? I haven’t heard anything like that yet.

Kind of makes one consider prostitution as a career choice, really.

Haha, stupid bastard. And $5500 an hour… Jesus. I’m with Val on this one. Gotta love the hurt/“I’m gonna cut your dick off in your sleep” look the wife has.

Spitzer resigned? I haven’t heard anything like that yet.

Huh… I’m almsot positive I heard he announced it, at least. I don;t see how he could stay, with THIS hanging over him.

Hahaha that look on his face is priceless

He is also known for prosecuting prostitution rings.

I assume the high rate was in order to keep the service discrete, which didn’t seem to pay off in this instance.

I’d think $5500 could afford a continuous rather than discrete service. </pedant>

Sorry… spending too much time on alt.fan.pratchett.

I haven’t heard of him actually resigning yet, but it’s pretty much inevitable.

After reading the affidavit, I have to say there’s no way he’s gonna survive this:

Additionally, the affidavit notes that after her appointment with Client-9 ended, “Kristen” spoke with a Emperors Club booker, who said that she had been told that Client-9 “would ask you to do things that, like, you might not think were safe…” “Kristen” responded by saying, essentially, that she could handle guys like that. 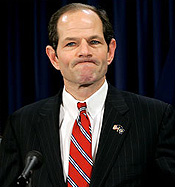 MARCH 10--With the bombshell news today that New York Governor Eliot Spitzer has been implicated in a prostitution ring, the Democratic politician will now always be known as 'Client-9,' one of the jo

It’s not the soliciting prostitution that’s going to kill him. David Vitterof Louisiana survived a scandal that mirrors Spitzer’s pretty well and he hasn’t resigned; Vitter was elected on a platform of strong families and morals so they had a field day on his hypocrisy. Yet he’s still trying to push through legislation.

No, the issue with Spitzer is that there’s whispers that he used public funds to do this and for some reason I hear he’s being charged under a Title III. If that’s true, there’s much bigger implications and there’s more going on than just being involved in a prostitution ring - that kind of stuff is saved for bringing down criminal structures. I might have heard about the structuring from NPR, which details the “structuring” and money laundering issues. Note, there’s no mention of Title III in the article because it states that Spitzer is being investigated through possible violation of the Bank Secrecy Act, which was amended through Title III of the Patriot Act. The laws have tentacles, I suppose.

If the money laundering is proven, then not only is he done but there will most certainly be a jail cell waiting for him.

Ah, I forgot to mention the fact that he’s a superdelegate who supports Clinton, so if he winds up resigning from his post and the DNC altogether, it could shake up things a bit if the Democratic race is decided by the convention.

Do you think he got his money’s worth?

Do you think he got his money’s worth?

If he did, hopefully he won’t mention that to his wife.

Originally Posted by Xwing1056
[i]
Quote:

[QUOTE]Originally Posted by Neiru_3 View Post
Do you think he got his money’s worth?

If he did, hopefully he won’t mention that to his wife.[/i][/QUOTE]

He didn’t mention that she didn’t have to sit there while he came clean so it’s probably a safe bet that she already knows.

That said, you do have to feel bad for her since not only is her husband sinking in this political mess, but she too is getting dragged down into this, and the media is not helping.

Spitzer has less than forty eight hours to resign or the minority Republicans in the legislature will file a motion to impeach him. Huh, wonder what he’ll do.

Oh no. The minority party will file charges to impeach him. That will require like… 35? of the Dems to vote with a solid Republican vote? Lordy lordy. Seriously though, his decision to resign would be made pretty much in absence of any threats of impeachment by the severe minority party. Also, I doubt the superdelegate aspect of this really matters. Spitzer said he would vote for Clinton because that’s who the people of New York voted for (that’s his story, and he’s sticking to it); his lieutenant governor would probably go by the same decision. He may be black, but in such a tight political race, it would not curry the favor of his consituents to not cast his vote for their guy (gal).

Crazy sarcasm aside, he did not get his money’s worth. If you’re paying $5500 for a prostitute, you’re paying for discretion and your name to remain secret. Obviously it did not for a variety of reasons.

The reason being a wiretap, can’t really fool that.

Well, I’m sure impeachment charges wouldn’t help his case. Not that it matters, he’s going to jail whether he resigns or not if this case keeps up. Ironic, that Spitzer was the one who brought up the issue that first showed a crack in the Clinton machine when she supported him on giving illegal immigrants driving liscenses. When she supported that dumb policy on that debate last year she showed how incapable of holding a position she is sometimes. So, even among Democrats he’s more trouble than he’s worth.

That’s his “story”, huh? I’m not too sure anyone would believe anything he’d stick too right now.

Back to Spitzer. I’m not so sure the Democrats should be sticking by him anyhow. Wasn’t he an Attorney General who made a big case out of catching folks who had a hand in money laundering? So he’s a huge hypocrite, he used public funds to finance his philandering by money laundering, and he was Client No. 9 in a prostitution ring. Come on. Republicans ate Craig alive for what he did because it was wrong, why can’t the Democrats, oh, I don’t know, show a little integrity for the office of the governor and help impeach him? In all actuality, it doesn’t matter what party he is, the man’s a disgrace to any office.

I mean, unless New Yorkers don’t mind being represented by a philandering criminal.

That said, you do have to feel bad for her since not only is her husband sinking in this political mess, but she too is getting dragged down into this, and the media is not helping.

Actually, I haven’t seen the media doing anything wrong to her. If you ask me, the media’s been doing pretty well with that. When Kirkpatrick admitted to his affair a month ago with his wife people didn’t bother her. Same with Larry Craig, David Vitter, and, well, either Mark Foley didn’t have a wife or she was too embarrassed to stand beside him.

McGreevy’swife has made a statement about it though on the radio. Basically, talking about how who knows what she’s going through and to give her a break; but honestly, when’s the last time you saw the media hounding down the embarrassed wife in a situation like this? Honestly, I can’t remember.