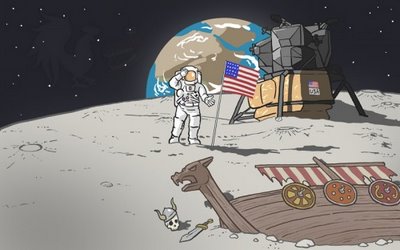 One of the few good things about living one a passable but not-quite-first-world country is not having to deal with this stuff. Except for the fact that we are hemorrhaging talented people because they have nothing to do here.

I think leopard-print counts as outside influence. The bikini must also be wool.

The solution is obviously to eschew the bathing suit altogether to display unadulterated swedishness.

Wait until they come back.

Hm, I guess that would explain alien invaders, wouldn’t it? >.>

But… then why do all aliens have British accents? IT MAKES NO SENSE D:

Everyone in the middle ages spoke English in a British accent, including the Vikings. Since the vikings conquered the aliens, they now speak English in the Vikings’ accent.

Would a bikini made from lutefisk be swedish enough?

Everyone in the middle ages spoke English in a British accent, including the Vikings. Since the vikings conquered the aliens, they now speak English in the Vikings’ accent.

Give Thor a break guys, he was wasted.

Mix all together thoroughly and refrigerate several hours before using (very important).

Make small round balls. Fry in a little butter until brown. Shake skillet constantly to keep meatballs round.

Place the browned meatballs in a covered casserole in a slow oven, 325 to 350 degrees for 30 minutes. They are delicious and have a very special flavor.

First since when was Thor an alien?

Also why does the guy getting kissed in the kicker look like he was drawn by the same guy who did all of that awesome artwork for Nintendo Power back in the early to mid 90s?

May I remind people that the original plan for democracy demanded educating the public. Socialist free theatre entrance for all, woo! Also, Weiila, I thought I was promised a socialdemocratic govt. a couple of years ago.

(Racist parties in Europe love cleaning up their platform when they’re about to hit the spotlight. Nothing surprising there.)

Though labeling someone racist for the wrong reason also calls for some attention.

Were the SD’s just a single-matter of immigration opposition party or do they have any … “good ideas”?

Hey, quick question, what is TOP GEAR? I thought it was a racing show. But i’m watching it and they’re making a car into a boat. is this what they always do?

They do things with cars. Like trying to sneak them into the garage in the middle of the night undetected, compare them to fighter jets, and yes, turn them into boats.

so what is the show about