Maybe someone will find this useful and build a little suspense for those who actually care about DBZ. 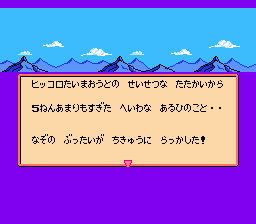 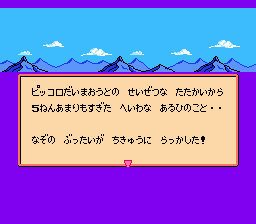 What does this mean? It means there’s now twice as much room to display text per window. No more “I r teh str0ngx0rz” script for this one! Just a few minor asm hacks left to implement and then I’m just waiting on the revised script to insert and re-release the DBZ1 patch.

In other news, this same style hack will most likely be implemented in DBZ2: Freeza’s Fuzzy Furious Furry Fest.

Look for more news (and a project announcement!) this weekend from me.

EDIT: The before pictuer is actually the after picture and vice versa. I went a little crazy when I was renaming the files.

So does this raise the amount of characters I can have on each line? :D:D:D

I could fix it so that the width of the window spans the width of the screen and get rid of the blue background, but that would require changing where the text is initially displayed and stuff.

If its absolutely necessary I will, but I really don’t want to cuz I’m running out of space for the translated text as it is. If I run out of space, I’ll just expand the rom and have a full 8kb bank for the script. Not a lot of work, but work none the less. I’m lazy.

Good enough for me!