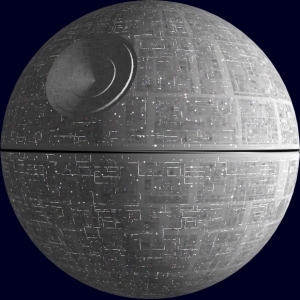 Put a fully-manned and operation Death Star in space against a not-dead Unicron. Now personally I think Unicron has the advantage here. Can you imagine the Death Star trying to shoot him?

I mean, the Death Star has the biggest gun in existence, but Unicron eats planets. No amount of Force-usage is gonna get The Emperor out of this one. Unicron also has a complete lack of trenches and exhaust ports. On the other hand the big guy got defeated by a robot that turns into a truck fer chrissake, powered by some weird energy source in a shiny shiny matrix, which could have been the TF equivalent to the force, in which case Unicron would be pretty much screwed.

Thoughts? Opinions? Suggestions to shut the hell up?

For Unicron all I see is an X.

Galactus would come and eat them both

Hmm… How fast does The Death Star shoot? I’ll have to agree that Unicron can dodge it (in humanoid form). On the other hand, Unicron can’t destroy planets as fast as the Death Star. One direct hit and he’s space debris. Can the Empire troops destroy in from inside? Maybe, but they’d need to know its weak points. And no, I don’t think the Force would work on it. Transformers have something similar to souls but they’re not the same thing. (I THINK they explained that in T: BEAST WARS but I don’t remember… and I didn’t watch TRANSFORMERS ENERGON so I don’t know anything about THAT version of Unicron.)

As for Galactus, he eats planets with LIFE ELEMENTS on them, so neither one qualifies. On the other hand he probably CAN blow away one of them with his Cosmic Power… but he’d be hungry and weak afterwards, the other one could get him. Unless he cheats and uses some superweapon (not the Ultimate Nullifier as it nullifiers the USER as well.)