Hey guys I thought it would be cool if you all posted any kind of prop, or wardrobe piece you own from the show…and explain to us who used it and in what episode

Also if you have any xena replicas from toddscostumes or xena catalog post em here too!

Here are my original and yin yang chakram both from toddscostumes

In this picture you can see my creation entertainment Queen Gabrielle Helicon Sword, actual screen used xena/borias style foam/resin sword(one of my favorites) and part of my gabrielle staff

This has got to be one of my all time favorite designs from the show, this is a METAL “hero” prop from episode past impefrect, it was used by Lucy Lawless and states on the COA “Evil Xena Metal Dagger”

I have the DVDs, does that count?

I’ve never been big on props and whatnot, seemed like a waste of money

I have Xena herself preserved forever in a Mylar pouch, forever remaining in near mint condition, between Dr. Who and of course Yasmine Bleeth. 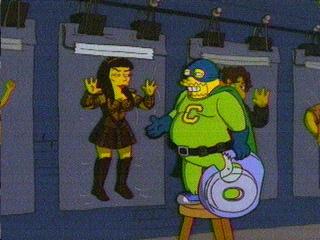 I have a Xena action figure with the armor removed and the paint rubbed off of the various nether regions and memories of a really campy show about hot, leather-clad, lesbians.

Which helps to balance out the two Hercules action figures I have of both main characters missing their shirts and memories of a really campy show about hot, sweaty, body-builders that I also have.

Thankfully memories of Young Hercules are self-justifying in their ridiculous amounts of homo-erotic overtones and cheese that it was basically mandated that any character with a vagina walking on that show had to die in ridiculously contrived ways before the episode’s end. God, what an awful show that was.

I remember that show…and Hercules. They both had terrible CGI monsters, but it was fun anyway. And once in a while, there would be an episode with Bruce Campbell in it. :3

Congrats, your [STRIKE]creepiest[/STRIKE] best thread yet

I remember a number of cross-over episodes/movies between Hercules and Xena. One of which had a weird Eules/Xena romance thing. Why do I remember so much about this show? I didn’t even watch it that much…

I used to watch both Hercules and Xena when I was very young… I can barley remember much about it though. The one thing I do remember is the water elemental Poseidon that appeared in the intro …that was cool!!!

But this brings back some memories! Not such a fan of props and stuff though… I’m not that into it.