Those of you that hang around the chat have had the priviledge of hearing me ranting and rambling about how totally awesome this game is going to be. Since the game just hit the first Alpha milestone, I thought it was about time I made a thread about WAR.

What is a WAR?

<a href=“http://www.warhammeronline.com”><b>W</b>arhammer Online: <b>A</b>ge of <b>R</b>eckoning</a>, hereafter referred to as WAR, is a new MMO developed by <a href=“http://www.mythicentertainment.com/”>Mythic Entertainment</a>, creators of Dark Age of Camelot, based on the Warhammer Fantasy franchise of <a href=“http://www.games-workshop.com/”>Games Workshop</a>, slated for release in Q4 2007, and it’s going to be totally fucking awesome for a variety of reasons.

What the hell was that? Did that orc just fly into a wall?

This is the recently-completed intro of WAR, and it showcases the different playable races in the game, all of who are out to kill eachother. That’s kind of the idea of the setting, all the races in Warhammer hate eachother and are out to kill one another. It’s kind of like Warcraft, only without the hippy Horde and goddamn Gnomes. I’ll get more into that later, for now, let’s just get you acquainted, shall we?

The Dwarfs of Warhammer made Dwarves what they are today. They are more greedy, more drunk, more bitter, more angry, more combative, more beard than any other goddamn Dwarf from any other goddamn setting ever. They set the bar for all those vertically challenged freaks who like to pick up huge hammers and smash the shit out of it. While drunk. Very steampunk. They’re based on the working class.

They’re goddamn elves. They’re pansies, but they’re good at it. Definitely one of the more interesting incarnations of the generic elves, heavily influenced by Celtic myths. Not much else to say here, I hate elves. Posh people.

The Empire. Hoomans. Religious zealots, high level of technology, huge military presence, etc. By FAR one of the coolest examples of humans in fantasy settings, they’re largely based on the Roman empire, combined with German names and huge cannons. Loads of corruption, loads of scheming, loads of zealots with hammers beating the shit out of things while soldiers die by the dozens. They also like to wear an assload of feathers EVERYWHERE and their codpieces are huge.

Corrupted humans, barbarians who worship the four Chaos Gods and are in league with Daemons while being at the mercy of their Gods. They mutate all over the goddamn place, there’s infighting everywhere, they massacre stuff. Sounds fairly generic, but in truth, Chaos is FAR more complicated and deeper than I can do them justice. Suffice it to say that they’re totally fucking awesome, and sometimes BLEED MICE. Like, they have mice for blood.

More goddamn elves. I hate these fuckers. Basically your standard issue dark elves, only with less suck and more pirates. Also slavery. Posh people who have taken a lot of drugs.

These are actually 2 races: Orcs and Goblins. The reason that they’re two races is that Greenskins are asexual space fungus and so there’s no females. These are the orcs you all know and love: they’re mean, green, fighting machines. They live to fight, fight to live, and just generally like trashing shit. None of this hippy shaman horde crap, fuck that. Goblins are pretty much what you’d expect, more cunning and less big, also serves as the occasional snack for a hungry Orc. Based on soccer hooligans.

All races are “paired up” to hate their opposites. Dwarfs want Greenskins dead, Dark Elves can’t fucking stand High Elves and The Empire sees Chaos and the monsters they work for as Godless heathens and an affront to God. This is present everywhere.

Ok, so there’s a lot of similarites with WoW. That’s fine, because Warcraft basically is a cheap Warhammer knockoff. So what makes the setting, and the game, any better than Warcraft? Well, a number of things:

THE GAME WILL BE EXTREMELY PVP BASED

Or, more accurately, there will actually be meaningful PvP content all throughout the game, which is one of the major, if not THE major focus of the game. The idea being that players shouldn’t PvE to compete in PvP, and the other way around. You could play from level 1 to “endgame” exclusively through PvP or PvE if you so desire. None of this bullshit grinding for honour oh shit instanced battlegrounds horseshit, or raiding the same goddamn dungeons over and over again for some goddamn pants. Just people running at eachother and hitting eachother with large objects in various states of bluntness. They’re expecting the average player to start off with about an 80%/20% PvE/PvP split, and those numbers to be reversed by the end of the game. Endgame will largely revolve around lengthy campaigns to capture and sack the cities of the opposition. Like, actual captures. You burn shit down and everything.

In the words of Paul Barnett, <a href=“http://www.youtube.com/watch?v=fWvAznIRVLA">"Everyone fights everyone forever and ever and we’ll take all your money for the next 20 years”</a>.

WARHAMMER ONLINE IS BEING DEVELOPED BY COMPETENT PEOPLE

Mythic Entertainment’s previous MMO, Dark Age of Camelot, is widely considered to deliver one of the finest PvP experiences in MMOs, and the game is what, 5 years old? Actual new content, not just another 40 man instanced piece of shit done since early beta came out constantly, the balancing was done fairly well (though there were a lot of innate flaws with the system which are being fixed for WAR), and they were very dedicated to their playerbase. In addition to their impressive track record, the developers themselves are extremely active and focal in the community, and have made considerable progress with the game seeing as how it’s only been in development for one year.

Warhammer Fantasy is one of the deepest, most interesting fantasy settings this world has ever known. It’s dark, gritty, funny, everything. In many cases it STARTED the stereotypes we all know today, in just as many cases it throws completely different awesome things at us. There’s 25 years of top-quality background material to work with, and while concessions have to be made to adapt the setting into an MMO (such as the alliances of races, and not having demon bitches with their tits hanging out), it’s still all shaping up to be extremely excellent.

YOU WON’T LOOK LIKE EVERY OTHER GODDAMN LEVEL 60 ROGUE 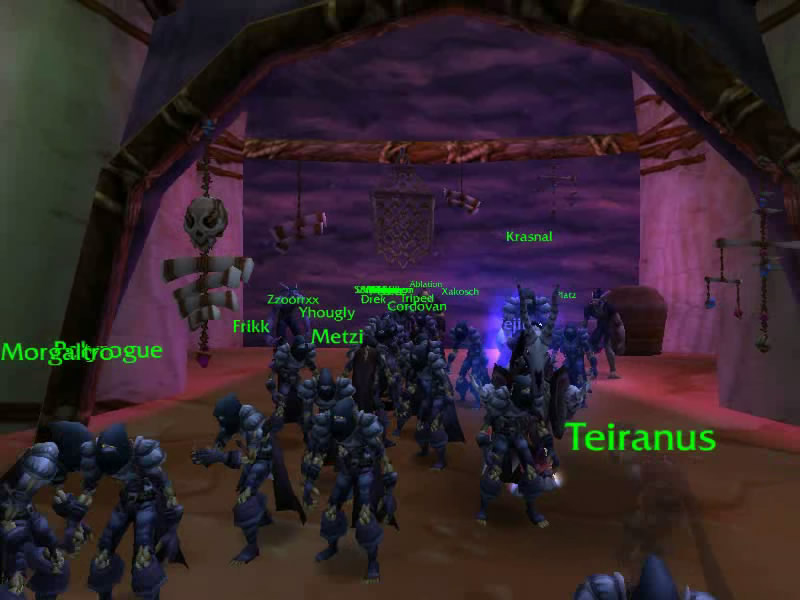 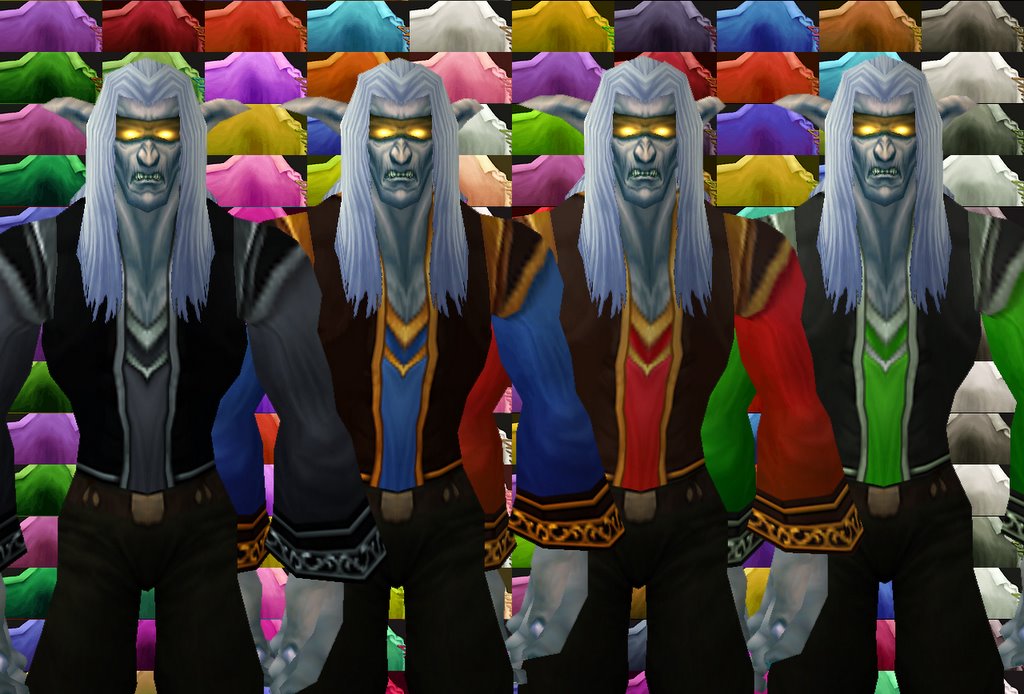 Seem familiar? Yeah, I thought so. The trend of everyone looking the exact goddamn same is over. Mythic is aiming to have EVERYONE look unique, though distinctly recogniseable as representing their class. They’re doing this in a few different ways:

1: Buttload of equipment graphics, wether racially restricted or not.

2: Buttload of customisation. Don’t like that chain sleeve? Rip it off, replace it with a different one.

4: Everyone looks more awesome as they get higher in level. Orcs grow in size, dwarfs get more elaborate beards, Elves get even less heterosexual.

5: Last but not least, WAR trophies. Rip off the skull of the guy you killed, wear it on your pants. Or as a hood ornament. Maybe just use his carcass as a backpack, I don’t know.

All of this combines to hopefully not get any two characters looking exactly alike, and at least it’s a step up from the current shit.

Stealthers are not in the game. At least not in the magic invisibility kind, and crowd-control is getting severely toned down. Basically, they’re cutting out the stupid, annoying shit and replacing it with stuff that’s actually fun for everyone. Battles are gonna last longer than the first 2 hits, too.

The dev team hates corpse runs and downtime. So they’re severely cutting down on that shit, along with a ton of other stupid MMO conventions, like having to run to your destinations before being able to fly there.

A LOT OF OTHER REASONS

There are a TON, a TON of reasons why WAR is shaping up to be the best thing to hit MMOs since WoW. I am unable to even scratch the surface of it in here, I’m just getting the word out. Please, do yourself a favour and dig around <a href=“http://www.warhammeronline.com”>their website</a> and the primary <a href=“http://www.warhammeralliance.com”>fansite</a>. There is so incredibly much stuff in here, and if even half of what they’re promising is true, this will cause many soiled pants.

I hope I at least managed to pique people’s interest, and I can guarantee you that I will keep calling attention to this game constantly until it’s released. So for now, in closing, I’d like to offer you some early screenshots of the Dwarf and Greenskin areas, until the next time I make a thread, when hopefully there’s more current examples and I might have gotten some hands-on time with the game.

mmm, Warhammer, tasty! If it does justice to the setting it’ll be something to watch out for.

TD is a plant.

My years of hard work have finally paid off.

Is there a beta or anything to sign up for?

I’m gonna wait until I hear about the WAR version of Leeroy Jenkins.

God I hope this turns out better than WoW

Well TD, you’ve won me over.

Will the game be done before I turn 50?

I plan to lead a dual existence; WoW by day, WAR by night. Work and sleep will come somewhere in between I guess.

hahahaha great description, man! I love how you said the Warhammer dwarves are “more beard.”

I think the Warhammer Universe (I’m only familiar with 40k) is awesome, epic even. It’s badass, it’s gritty, and it blends numerous genres into one. The Warhammer 40k PC game series is a favorite of mine, simply because it’s so fresh and original. Imagine a that years into the future, Orcs and humans are still beating at each other with large hammers and axes.

I also love how the humans aren’t goody-goody pansies. In 40k they’re religious zealots who use Commissars like the fucking Stalinists. Plus Warhammer is bloody and violent and everyone’s drunk.

THE GAME WILL BE EXTREMELY PVP BASED
WARHAMMER ONLINE IS BEING DEVELOPED BY COMPETENT PEOPLE
SPEAKING OF ROGUES, THEY’RE GONE. SAME WITH CC.

Well, Blizzard may not be learning from their mistakes but it looks like someone is. I’m convinced.

Heh, yeah, I’ve had my share of ideas based entirely on looking at what other guys did wrong and then not doing that.

Heh, yeah, I’ve had my share of ideas based entirely on looking at what other guys did wrong and then not doing that.

Which usually wind up having the best results, right?

You people make me laugh.

Which usually wind up having the best results, right?

I didn’t say I actually tried to implement them.