I Have Prismatic Wardrobe and double dip:P

And i want a Hookey-Pokey Knight ;_;

I’m really outdated… when did this two-in-one-card thing start?

if you mean the split-cards…they began at invasion.

Anyway, please tell me BFT is a fake.

And this gives me an idea. I have a M:tG card creator, I’m gonna post some cards I’ve made.

Originally posted by Ren
[b]Anyway, please tell me BFT is a fake.

And this gives me an idea. I have a M:tG card creator, I’m gonna post some cards I’ve made. [/b]

if it’s real, then it’s most likely banned…

Man, I remember playing with 4 chaos confetti in a deck.
BTW: they are removed from the game, not put in the graveyard

if it’s real, then it’s most likely banned…

I’ll send it to you via email/icq/irc/something, as I lost the link to it.

email. it’s the only way i’m guaranteed to get it. my email is in my profile…i think…

Originally posted by Ren
Anyway, please tell me BFT is a fake.

If you mean the BFM, then yes, it’s real.

is it allowed in official tournaments, then?

Originally posted by Ren
[b]Anyway, please tell me BFT is a fake.

And this gives me an idea. I have a M:tG card creator, I’m gonna post some cards I’ve made. [/b]

The Unglued set is essentially a mockery, a parody, featuring crazy stuff. Nobody would use the BFM in a tournament.

Right. But I remembered things that happened with bet cards some ages ago.

There was a bet card called Falling Stars or something, that somehow got into a championship. The card says “throw this card up” and listed many effects, which depended on where it landed.

A desperate player had this card. He torn it into pieces and threw all the pieces up. He knew he was gonna lose anyway…

Heck I don’t have the patience to go back home, get into my card creator, translate all I had written, upload and post here. I’ll just show two cards I did per requests:

6T: Choose a target creature from any cemitery. If the creature is black, remove it from the game. Otherwise, put it back into play under the control of its owner at the end of the turn.

“Anubis will weight the heart of the dead. If he was a fair person in life, his heart will weight less than a feather and he will live forever. Otherwise, he will be eaten by a crocodile-headed goddess.”

Ante was banned from tournament, though.

And unglued cards are real. They just aren’t allowed in tournament since they’re parodies (although 4 things from it made it into the legal MtG game)

Which things are you talking about?
(Oh, and Ren, I think the Pyramid should be a nonbasic land)

Where do you get the Card creator?

Oh yeah, I remember that thing. Who could forget such gems as this card? 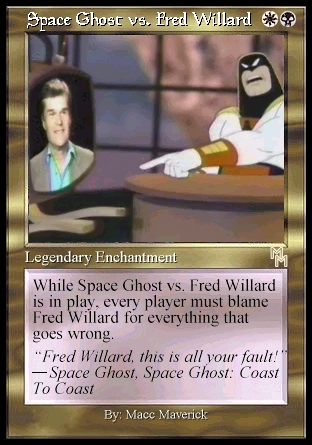 Oh yeah, that was a classic, Macc

The links are on there