Anyone on the east coast? If so, share your preparations/experiences of this hurricane here…

I bought gallons of water and iced tea, and cereal and oatmeal. I’m in midtown NYC and not near the evacuation zones, but electricity is still likely to die.

Also, a whole wall of my room is a window. Could get interesting.

Yeah, but it looks like it won’t be so bad for my area(south Jersey). Still, I had to get shit out of the basement due to likely flooding.

It was already a category 1 when it made its first landfall in NC so it was predictably unimpressive. I’m surprised people made this much of a fuss about it. I guess the newsrooms had nothing better to talk about.

I slept through it. The blizzard last winter caused far more damage than this.

I’m in southern NH. I’m not particularly concerned; I’m just keeping on. My mom and stepdad are prepared for the worst, which is realistically merely “major power outages for a bit”.

Nothing but cloudy skies in Buffalo. Just as long as Irene doesn’t take out Atlantic City before I get there next month, I’ll be happy.

It was already a category 1 when it made its first landfall in NC so it was predictably unimpressive. I’m surprised people made this much of a fuss about it. I guess the newsrooms had nothing better to talk about.

No one is gonna risk having another New Orleans on their watch, so it’s not surprising at all. Though of course the media tends to trump things up to ridiculous proportions, I don’t see much harm in being overly safe than overly sorry.

You’re right people should be concerned after Katrina, but the irony is that the majority of Katrina’s damage was secondary to under-funding and under-maintenance of the very mechanisms they had in place to prevent the disaster from striking. God forbid people pay taxes for something.

I just see warnings about storms like this and I am reminded of the farce which was “snowmageddon” or how I sat through a category 3 typhoon from my wobbling 8th floor hotel room and took a flight out of Okinawa the following day. Maybe its me who’s desensitized and I shouldn’t be.

While we’re on topic: 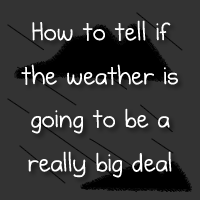 A comic about hurricanes and television.

I love the oatmeal.

Its one thing for the media to hype, another for the governor of New Jersey to start ordering people into their houses. My power company even claimed the power would probably go out - in fact it did go out today, for a few hours.

It is the “Katrina Effect” - Katrina was a such a fuck up that all the authorities are paranoid of getting crucified if even the smallest thing goes wrong.

And once again, New York has yet to be reduced to a smoldering crater of human civilization. Mass media lies again.

So, when I first got up on Sunday, the weather forecast was “TROPICAL STORM WARNING until 4:30 PM ON MONDAY” and it was all “40-50 mph winds, with gusts of up to 60 mph” with also two Flood Warnings, an Areal Flood Warning, and a Flood Advisory.

Then in the early evening the Tropical Storm Warning was until 6:30 PM, and said 25-35 mph winds with gusts of up to 50 mph. Then it was until 8:30, and just said “… TROPICAL STORM WARNING CONTINUES …” and by the time I was ready to go to bed, all that was left was one of the Flood Warnings.

The warnings were worth it. Things could have been a lot worse than it was. We were anticipating having to ground our ambulances during high winds, but thankfully we didn’t. Even with less-than-expected severity, Irene increased our response times and put a lot of people in danger. Cheers to Christie, he had the right of it.

Yeah … actually looking around, I’ve seen images and videos of nasty flooding and damage. So I did kinda dodge a bullet.

At my parents’ place, we spent the better part of a day trying to prevent water coming into the basement. And what happens? Water starts seeping in from the foundation, something that had never happened before. Gotta love nature.

Still, we got off comparatively easy. We never lost power, and nothing was ruined.