This shows the superiority of people with intelligence. (people who aren’t members)

Forgive me, this is the first time I’ve made a link-thread.

I’ll Join as Communism and see what happens.

First off - Why are you waisting your time and finger energy trying to talk to children? I understand what you were saying to them and thier responses were unbelievable. Especially outterspacekid. He reminds me of those highschool boys who thought they were funny because of how rude they were… And then realized later on that they never grew up and would thus pass on the terrible habbits to thier most unfortunate offspring. This is, of course, assuming that they find some mate who thinks they are intelligent enough to breed with. But more sad than that, is the fact that stupid people DO breed. I grew up in Kentucky, I know all about it.

ANYWAY - To get back on the topic that was addressed… I’ve been saying I dont like anime so much anymore like I used to. Let me clarify:

I have become fet up with many of the modern “run of the mill” anime TV SHOWS. A good example of this would be when I tried to watch Full Metal Panic. I can stand and enjoy watching the main character and his two partners. However, the lead female AND her little friend with the mini-camera fester an undescribable hate inside me. I’m not sure what derrives this anger. I’d safely assume that it simply comes from being annoyed by them.

Otaku- Yes, I know it is not fair to say that the fans are why you hate somthing… But to a degree this can be the case. In my situation, for example, there are several anime-obsessed students whom attend my school. Most of which are the female artists. All of them are caucasion american girls yet interject “Kawaii”, “Nani”, and other japanese terms into thier lingo. Moreover they give little peace signs (victory signs) and similar gestures of modern Japanese culture.

It is in this that I feel burnt out on Anime. Fair enough? I feel that I can still enjoy watching the entire box set of Gundam Wing, or Akira, or any of Miyazaki’s works… However, the typical cutsey anime girls with thier high-pitched voices and over exaggerated emotions are unbarrable. I don’t understand why the lesser realistic animes out there garner so much attention. I myself am barely able to resist breaking things when a I watch things like this: 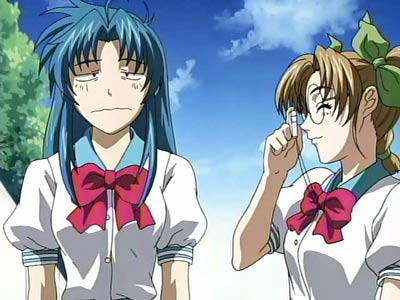 Thats my story. If I can clarify anything please ask.

OPINIONS ON THE INTERNET!

Alot of anime is crap, but the ones that are good, are usually excellent.

Feel free to discuss the subject, however let’s not start inter-forum pissing wars. Editing out the links in the first post.

That girl on the left looks exactly like Dias from Star Ocean the Second Story.

I haven’t seen that many, but the ones I see I usually like. My favorites are Read or Die (awesome), .hack//Legend of the Twighlight (voice acting sucks, but good action and music), Gate Keepers 21 (awesome but only has 6 episodes) and FMA (awesome).

IMO, most Asians find exagerrated emotions to be funny, especially for lil’ kids.

Well, it’s all a matter of opinion when it comes to which animes are crappy or good, really. Some people may find something great, and others strongly dislike it. That’s just a fact, which should be considered.

The same can be said for people who dislike anime. Sure, they shouldn’t flame other people for liking it, but they do have a right to state that they don’t enjoy it as some do.

That’s all I wanted to say… for now.

I grew up in Kentucky, I know all about it.

I feel your pain, man. What part of Kentucky?

I don’t understand why the lesser realistic animes out there garner so much attention. I myself am barely able to resist breaking things when a I watch things like this:

One reason could be that it’s the unrealistic part that attracts someone’s attention. If it were too real it wouldn’t serve as a way to escape day to day life.

Hehe, I enjoyed reading the flood of unregistereds that came in. I think we really shook up the place.

But, I’ve thought about it, and I’ve realized something. If they are serious about it, they’re nothing more than a bunch of junior high school aged children, like those I had to live with, who hate everything they don’t understand simply because it’s different, or, if not that, they’re petulant child-men who have no concept of the opinions or emotions of others, and only care about their own pathetic little desires.

Either way, so long as they don’t start coming over here or to other boards, why should we care what they think? Really, we’re the bad guys here. We’re going to THEIR forum, pissing THEM off, and trying to change their opinions.

Yeah, but that’s exactly what they want. Admittedly, I found a few of the comments amusing- others were simply irritating. They’re almost certainly not serious, it’s just the same ‘humerous’ scenario over and over - noobie signs up, gets uber annoyed and voices their opinion about how members of ‘Anime Sucks’ simply have not yet seen the true greatness of anime, members come out with the same exaggerated opinion using flowery words and sharp wit, or so they think anyways. They might not feel as strongly as they say they do, they just get a kick out of saying it and watching people react. They don’t care, neither should we.

I think it’s really nothing more than a pathetic attempt to make us anime fans angry for their own amusement. What say we don’t let them succeed?

Also, you guys acted a lot more level-headed than I expected you to. I guess it’s a good thing Hades never got here, eh? :booster:

What are you talking about? I barely like anime anymore. I used to be obsessed with it, but upon further familliarizing myself with it, a lot of it really is stupid. I pretty much wont watch anything but Miyazaki and certain specific series and movies now, like G-Wing and Eva.

Otaku- Yes, I know it is not fair to say that the fans are why you hate somthing… But to a degree this can be the case. In my situation, for example, there are several anime-obsessed students whom attend my school. Most of which are the female artists. All of them are caucasion american girls yet interject “Kawaii”, “Nani”, and other japanese terms into thier lingo. Moreover they give little peace signs (victory signs) and similar gestures of modern Japanese culture.
As irrational as they are, I share your feelings. You forgot to mention that they rape the pronunciation of almost every word they say, though. There’s just something idiotic about saying “Deh-zuu” when you should be saying dess.

You should have been at my school last year, when Teen Titans et al started to seep into people’s heads.

“NO! SHUT THE FUCK UP AND SPEAK ENGLISH!”

Also, seriously, ‘shaking up’ someone else’s forum isn’t an acheivement.

I was thinking more along the lines of your reactions, rather than your opinion. I admit, it was kinda dumb, but that’s what I was thinking of when I said that.

Shin, Agora is (supposed) to be RPG-centric, thus many people here care more about their games than their shows. For example, I don’t care too much when someone says that Evangelion sucks, but I feel an impending urge to assasinate when someone says Chrono Trigger sucks.

No one should be saying that Evangelion sucks.