Anyone like these games? I am currently maxing my character out in DW1 before moving onto 2. I beat them all years ago when I was in high school, but I want to beat them again.

1 - Pure awesomeness, even though it’s really basic and doesn’t require you to do much other than battle. I still enjoyed the hell out of it for some reason.

2 - Crappy. I hated it. It’s boring and once you get the boat it’s nearly impossible to figure out what to do next without a walkthrough.

3 - My personal favorite in the series. The gameplay allows you to choose your 3 side characters, job classes and all, making it the same kind of game as Final Fantasy, but a more fun experience.

4 - I really loved this game too. Its chapter system is awesome and I love the storyline and how each side character gets a chapter to develop. This is still the only RPG I’ve ever played that has that setup.

Can’t say I’ve ever heard of this series. 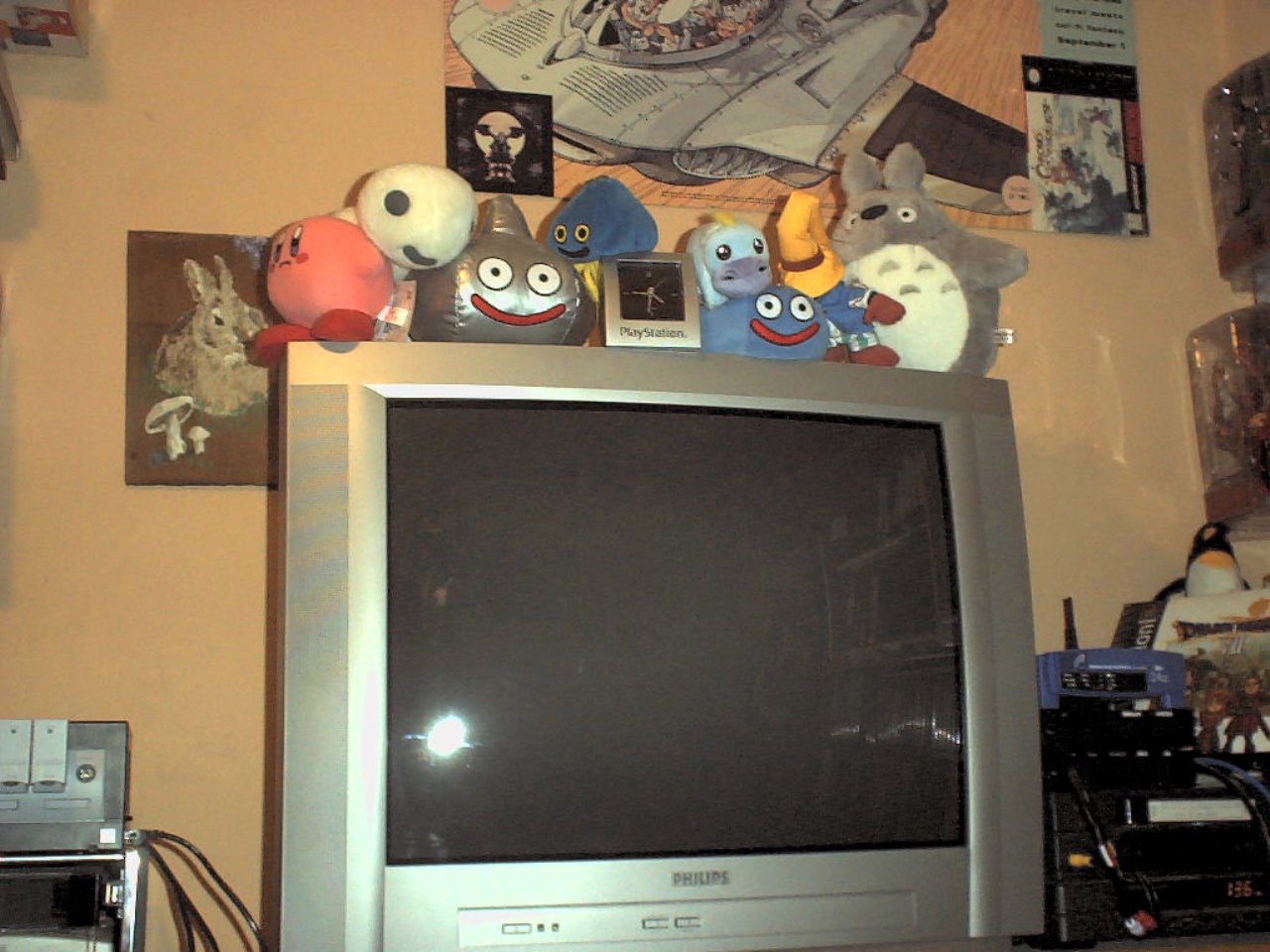 Sarcasm aside, Dragon Quest III is my favorite game of all time, and I’m elated that EBStop is taking <A HREF=“http://www.ebgames.com/ebx/product/256487.asp”>pre</A><A HREF=“http://www.gamestop.com/product.asp?product_id=281268”>orders</A> on Dragon Quest VIII. I’m also happy that Square Enix finally has the rights to call it “Dragon Quest” in America instead of “Dragon Warrior.”

I really wish you would update your DW4 shrine though.

Ooh, we have a nest of Dragon Warrior-lovers here. Every now and then we come out of the woodwork to talk about the games.

When I was younger, #3 was my favorite. Now, I’m not sure what to say. I’ve definitely played 2 the most. Right now I’m working on constructing a shrine for the SNES DQ1&2r remake, as much an excuse to play through the game as it is otherwise.

There’s not too much there for #2r right now, but I do have most of the dungeon maps up.

I’ve played 5 and 6, but neither all the way through. They’re great, but I miss the Erdrick story stuff. Zenithia never really did it for me.

7 is a great game. I want to replay it myself (I didn’t beat it but I put a good 80 hours into my first attempt, if not more - and I know that’s hardly anything if you want to master all the jobs), but it takes so much time. Plus, it takes 10 or 12 hours for the game to really take off. Once it does, though, it’s great. It’s set up so that each place you visit almost feels like the chapters from #4. I just love how they strung together a bunch of self-contained stories to make up the bigger game world, and your party is the thread that runs common to all of them. Since it’s not related to 4 - 6 storywise, I suggest that you play 7 next. 8 can’t be too far off, can it, after all?

I really wish you would update your DW4 shrine though.

We’re kinda working on that behind the scenes… And updating a lot of the other shrines too. Hopefully something comes of this.

[edit] RPT: I like how the “maintained by” part of your shrine-in-progress is one of the parts you haven’t completed yet.

My personal favorite is DW4, but they’re all good. I recently picked up DWVII. Really good stuff, that.

I can’t wait for DQ8. I haven’t anticipated a game this much since… FF9!

…you know what? On second thought, someone else had best answer this.

I didn’t think there was a particular order for the 4-6 trilogy. I simply thought that the Zenithia “thing” was just a common thread linking them, but not to the extent that Erdrick linked 1-3.
I’m looking forward to someone providing more information about this.

Out of the games in the series I’ve finished, it’s consistently a tossup between 3 and 4 being my favorite. I thought 5 and 6 were excellent as well, and I may very well prefer one of those after I’ve finished them (everyone knows I have this thing about getting to the very end of a game and not finishing it, ha ha). With 7, I’ve liked it, but I feel like it’s just taken too much of what has felt like work. One was all right because I hadn’t known better, and 2… well, I swear that the final boss cheats. I never say that sort of thing, but that bastard cheats like Necron.

Dragon Warrior really is one of my favorite series. I don’t play much of it anymore, but I’ll get back to it one day. Yeah, suuuuure.

I don’t remember much about DWI because all I was doing was looking at my bro and our cousin playing, but I enjoyed it enough to buy DWIV as soon as it came out. I thoroughly loved it. A lot. I enjoyed all chapters and spent many hours making money and levelling up just for fun. I later tried playing DWIII because my bro recommended it to me, but could never get into it.

When I realized decent translations were available for 5 and 6, I immediately acquired both and got very far in them, without actually beating any. This was mainly due to the fact that my comp at the time exploded and I lost everything. I never got around to starting new games on my current comp for obvious reasons.

As for 7, RPT described it exactly as I would have, but with better words. I bought it in December 2003 and it’s still not beaten. ^^; I’m taking a break from it and its ugly songs. I can’t stand the Dharma Temple theme, arg.

I’d also like to hear an answer about how 4, 5 and 6 might be connected. I didn’t even know it.

Consensus around the inter-web is that it’s 6-4-5, just like it was 3-1-2. I assume the only evidence they have of this is that Zenethia was locked in DQ6 until you free it. Other than that, I can’t personally find any firm connections between the games. It’s not nearly as apparant as the connection between 3-1-2.

I know they are split into trilogies (4 started a new trilogy, which doesn’t make sense since there’s 4 for NES and 2 for SNES… maybe 4 shoulda been on SNES, but then again we might not have gotten it over here, so meh)

I need to find DQ5 and 6 translations now. DeJap’s the best, right?

Check <a href=“http://donut.parodius.com/”>The Whirlpool</A>. They tend to have information about translations.

Consensus around the inter-web is that it’s 6-4-5, just like it was 3-1-2. I assume the only evidence they have of this is that Zenethia was locked in DQ6 until you free it. Other than that, I can’t personally find any firm connections between the games. It’s not nearly as apparant as the connection between 3-1-2.

Wasnt it locked because it no longer existed in the real world? It was dream world only right?

I love DW7. Its a damn fucking good game. BUT GOD, it is a BEHEMOTH. I finished it once by myself when I got it. I actually finished it a 2nd time to write the DW7 walkthrough we have (it was 32 pages front and back on paper) and my ex played through about 2/3 of it. You practically need a support group to help you through this game. I think that as you approach the 2nd CD, there’s a period where you have to push yourself a little more to get to the 2nd CD transition which has a few interesting twists that’ll keep you going.

I absolutely love the Dragon Warrior games. I’d have to go with my favorite being 6- it was the one that really hooked me into the series.

Zenithia was brought into the Real World in DW6, but everyone in it was dead. After you kill Duran, it appears in the Dream World fully functional. I’d think 6 comes last since Zenithia’s already been wiped out, but I dunno.

I have only played 1-3 and 7. DW7 was the only one I beat. I loved making my characters really strong then easily killing the final boss.

I absolutely love the Dragon Warrior games. I’d have to go with my favorite being 6- it was the one that really hooked me into the series.

Kagon, where are my Tiny Medals?

DW7 is going to be the first game I buy when I get a new PS2.

I had a bunch of games, including DW7, but I sold them all. that’s life.