An MP3 Player that SHOOTS

This was quite humorous.

How much ethical to solve customer problems rather than to leave?

Survival of the Fittest: Hosting companies do provide the notice period to customers to migrate their data and files to an alternative when they are not able to sustain in this highly competitive h…

Talk about giving your position away.

Just what disgruntled persons need: listening to their lame sad songs while shooting the people that made them disgruntled from their office, school, wherever. Too bad they might give away their position.

Hmm… interesting… I wonder where they got the idea…

I had hoped they would have stopped at the cellphones. But no. I suppose we’ll have gun tupeés soon.

I like crimson red and all, but we can end up having a little too much of it. And I hate working a lot, which I would as Death.

Who’s got that giant rainbow “WTF?”, because this deserves it.

“This is our bit for world peace - hopefully, from now on many militants and terrorists will use their AK-47s to listen to music and audio books.”

Yeah, in BIZARRO WORLD. I really hope this guy’s kidding. Or am I too wasted to understand something vital?

Depends … ARE you wasted?

I can see it now…“World leader assassinated by the Macarena”

I think it would be interesting as a psychological weapon.

“I cannot fight like a man with this accursed girly music being played by the Great Satan! Allah! Take me!”

I really hope people don’t start taking that site seriously on any topic.

Don’t worry Sinistral, we’re only the same people that can’t tell the difference between Yahoo News and Yahoo Entertainment.

Depends … ARE you wasted?

Yes I was wasted and yes, I thought I missed something, didn’t realise it was ananova.

Ain’t got one with a rainbow, but will this do? 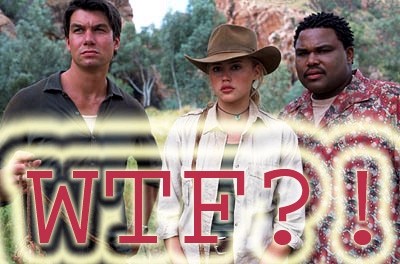 I’m with Sin. I don’t even see how such a player can function with the gun shaking around as much as it does. The shock would destroy the internal HD in seconds.

Originally posted by Nulani
I myself hope people don’t start taking anything on the Internet seriously. I mean, it’s the Internet. the Onion is more serious than the Internet average.

I do believe they got the idea from here.